May 28, 2013
Today is the day we zip line! We all prayed that the rain would let up long enough for us to take this optional tour. I guess our praying paid off.
We boarded our bus for a five minute ride to the nature preserve. The name of the company is Cables X-Tremos.
Our guides met loaded us up with our gear and we then proceeded to hike up to the first of eight zip lines. I believe that we hiked up about 1,000 feet. We made several stops so we could catch our breath and to get a glimpse of the wild life. Spider Monkeys galore! There were some Howler Monkeys as well as some raccoon looking vermin hanging around. I will have to post the video footage on You Tube. It took me a couple of zip lines to get the braking down. That was my biggest issue but I guess I gave it too much thought.
Michelle had a little issue with the braking so after the 4th zip line, she rode tandem with one of the guides. The guides were very understanding and helpful.
When we got to the last zip line, it started to rain. Not too much but enough to get the cables wet. This made it very hard brake. We had to put a lot of pressure on the cable just to slow down. 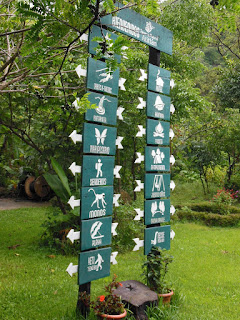 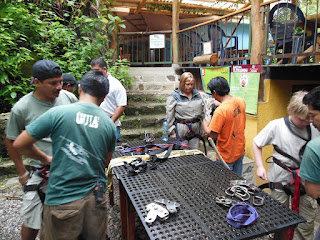 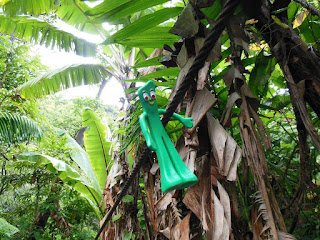 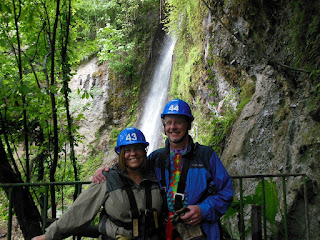 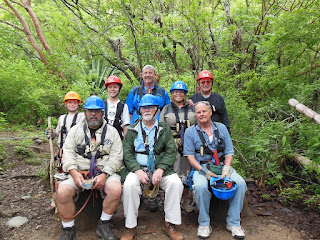 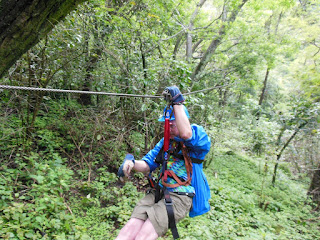 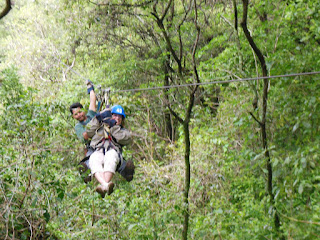 After the zip line tour, we headed back to our hotel so we could pack our bags and get ready to move on to our next destination, Antigua!

We boarded our bus and started our journey to Antigua. We made several stops along the way. We visited a market (without making a purchase) and a few of the towns outside of Antigua. We also stopped at a local brick maker’s home. We got a demonstration on how to make mud bricks and roof tiles. The process used hundreds of years ago is still in use today. The kiln used to fire the tiles is a site to see.
We were told that a company has opened shop and they produce tiles with modern machinery. It appears that these tiles are inferior product as they do not last as long. I guess that Guatemala is not quite ready for the modern age yet.
We stopped for lunch in Chichoy. Chichoy is a very small town. Probably one of the better lunches we have had. Since this lunch was not included with the trip, we received a menu (in spanish) and got to order whatever our stomachs desired.
I ordered the pollo with arroz. Even though we were told that it was safe to order the salad, I just can’t bring myself to eat anything that may be washed without using purified water. The pollo came with steamed vegetables. Steamed veggies are safe to eat.
The restaurant had a fawn inside. The fawn was not fenced in. He/she had a little straw bed and it basically just kicked back there. There was a stuffed deer in the foyer of the restaurant. It was unclear if she was the mother of the fawn. 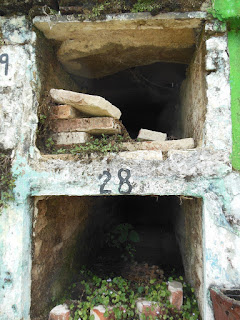 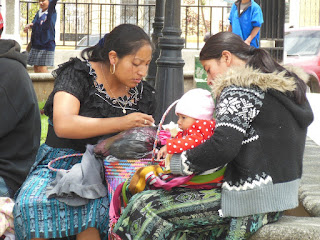 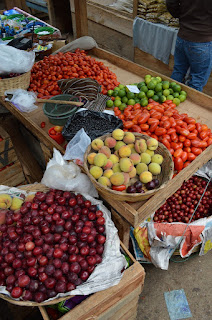 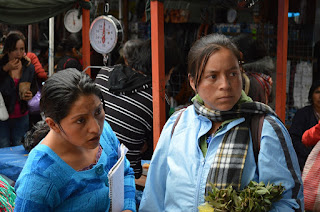 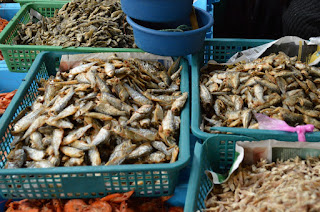 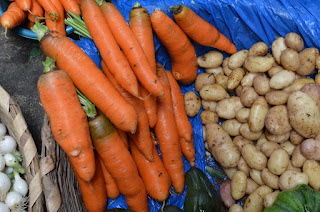 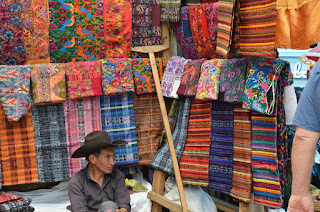 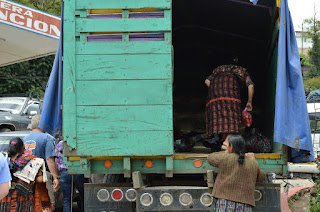 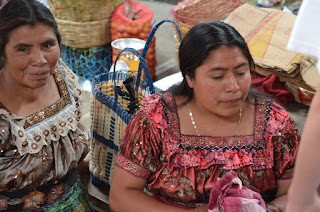 Around five o’clock we arrived at our hotel, Hotel Los Pasos. This place is awesome. Very quaint with a personal touch. Our room is a little small but we love it just the same. Did I mention that every hotel that we stayed at so far has twin beds? We slept in the same bed on the first night and since then we have occupied both beds. Now I know how Ricky and Lucy, Rob and Laura Petrie, Fred and Wilma Flintstone felt. Actually, Fred and Wilma were the first couple to share a bed on national television. 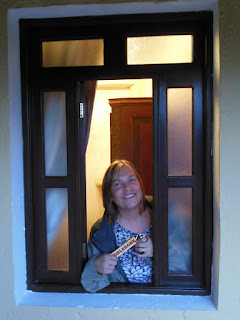 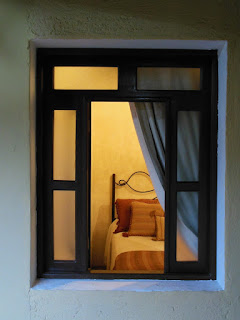 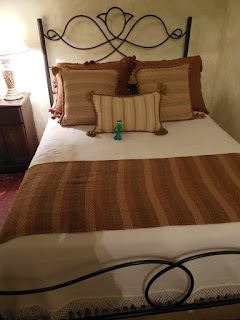 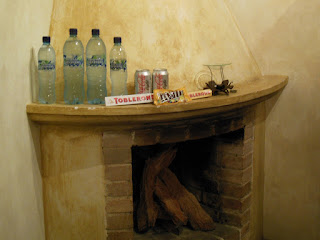 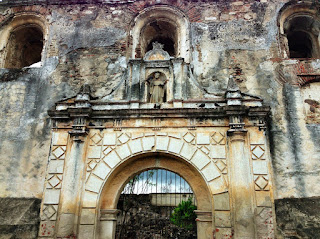 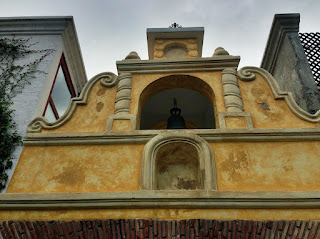 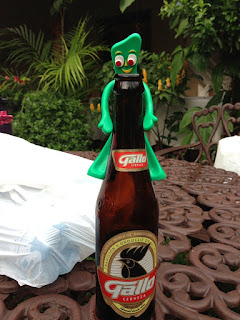 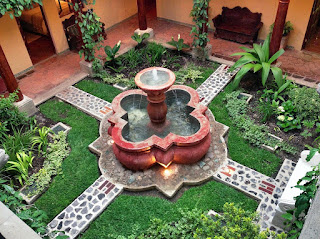 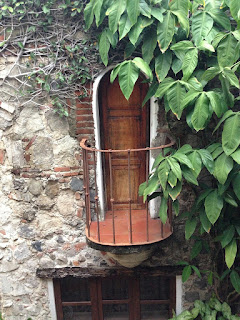 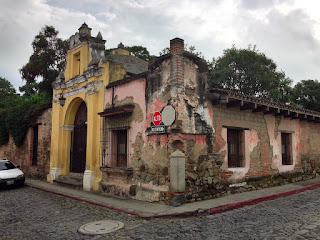 Tonight we ate at a local restaurant. I went for the chicken. Michelle opted for the Caesar salad. Michelle is a little more daring than me. I also ordered a Gallo beer. I am acquiring quite a liking to this beer. I have probably consumed more beer on this trip than I have over the past three months. Not that I am over indulging. Maybe three during the cocktail/dinner hour.
After dinner we had the option to walk back to the hotel or take the bus. Six of us opted to walk back. It took us about thirty minutes to walk back to the hotel but that helped work off some of the food in our stomachs.
Tomorrow we are going to our home hosted lunch as well as a macadamia/coffee plantation tour. Carlos said that we will be taking a “Chicken Bus” to the plantation. We are not sure if the our group will be the only inhabitants as these buses are old school buses that have been converted to hold approximately 120 passengers (not including chickens).
It is a little late now so we are going to bed. It is going to be a big day tomorrow.