May 25, 2013
We made it to El Salvador in one piece and basically on time. We had a slight delay leaving Dallas due to an airline personal change. I guess that they had to get the paperwork straightened out. Well, that was the story that they told us because about fifteen minutes later, three teenagers boarded the plane with bags of McDonalds food.
Turns out that one of the kids lives in El Salvador. I found this out as we were waiting to get off the plane in El Salvador when she almost got hit in the head with a suitcase from the overhead compartment. We were talking and she mentioned that her mother is from the US and her father is from El Salvador. I said, “I guess that makes you muggle born” but she didn’t get it (or possibly hear me). I thought it was funny. That was the extent with of the conversation with my first local citizen.
After departing the plane, we made it down to immigration and customs. We got through rather quickly. We had to pay a $10 entrance fee but we got a cool sticker and stamp for our passports.
Once we got outside our trip leader, Carlos greeted us along with the high humidity. I believe that the temperature was about 87 degrees. A water vending machine was close by and 90 cents later I had 2 liters of water. The local currency is US which made getting the bottle of water as easy as getting a bottle of water at home (except that it cost about $2 less here).
We waited for the other three travels that were on our plane and then got in the van and headed to our hotel in downtown El Salvador.
The hotel was a very basic room. Twin beds and a bathroom. The shower head was missing so we had a faucet for a shower. It really didn’t matter as the cool water felt good. Oh, I forgot to mention that El Salvador has a kick ass local beer called Pilsner. This is some real tasty beer. Hopefully I will be able to find it back home as we will not be returning to El Salvador. 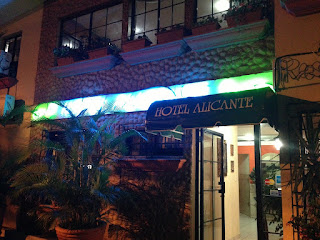 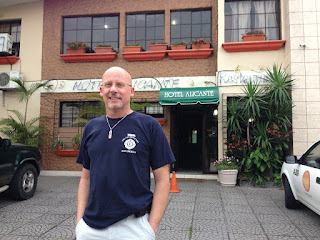 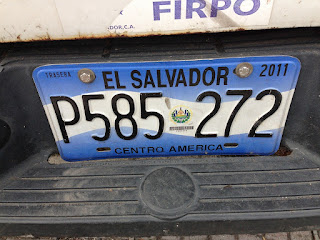 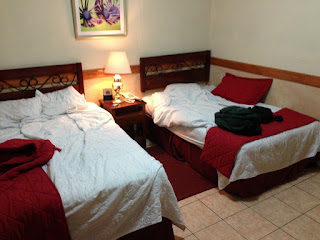 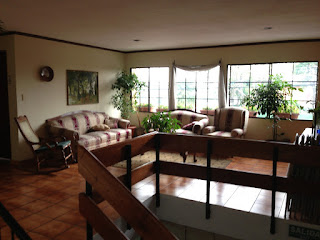 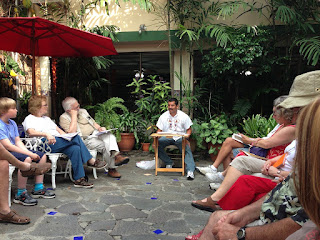