May 31, 2020
Memorial Day vacations are for suckers!  Go the following weekend and avoid the crowds (aka cluster fucks).

Due to the current COVID crap that is going on we both reached our vacation day caps so our employers told us to take a couple of days off.

Since we finally got some good weather (aka spring) we felt a road trip was in order.

Unfortunately four days isn't enough to head down to Telluride or Durango so we opted to head over to Utah and visit Dinosaur National Monument.

Now, in all fairness, we knew that the visitor center and quarry at the monument were closed and that we were taking non essential travel but being cooped up in the house with nothing to do was just not going to happen.  Period.

We got our camera bags packed, truck loaded and booked a hotel in Vernal, UT.  Vernal is the closest town to the monument.

Not a lot of good hotels in town.  Most of them dumps and with all of the COVID stuff going a we didn't know what our food options would be so a kitchenette was a must.  A little searching on Expedia and we found TownPlace Suites by Marriott.  $95 a night.  Cool.

Our plan was to take highway 70 through Vail so we could stop at Rifle State Park and shoot the waterfalls with our Lee Filters then head north up to Vernal.

One thing that is nice about COVID is that traffic is a lot lighter.  We averaged a constant 65 mph speed which was awesome.  There were a few construction projects along the way but nothing to complain about.

We arrived at Rifle State Park around 10am and were shooting pictures a few minutes later. 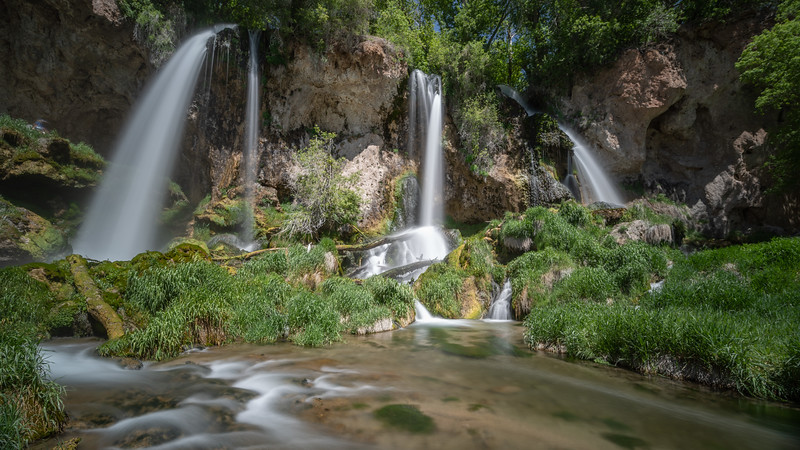 The need to feed took us over so we decided to eat lunch before taking a few more shots.

Within the half hour break, the park quickly filled up with people.  The people had no respect for the park.  Kids climbing on the rocks, hanging out under the waterfalls and dogs running with reckless abandon.  Fuckers.  We left.  I hate people.

We arrived in Vernal in the mid afternoon and checked in to our hotel.  The hotel front desk clerk was not wearing a mask.  Not a good sign.

The room was better than expected.  We had an induction stove, full size refrigerator, dishwasher and microwave.  No oven.  Minimal pots and pans with silverware service for two.  Perfect.

Off to the grocery store for consumables.

Once again we didn't see anybody wearing masks outside of the store.  We put our mask on and when we went inside, the only people wearing masks were the store employees.  Most likely they were wearing them due to store policy.  We couldn't believe it.  People would stare at us like we were idiots.

We picked up some breakfast items (eggs, milk, cheese, butter etc) and some basic lunch stuff to hold us over for the next day.

We perused the household cleaning aisle and found plenty of bleach, Clorox wipes, disinfectants, toil et paper and hand sanitizer.  WTF?  We cannot find any of these items in Colorado.  Needless to say, we bought these items as well.

We dropped off the groceries at the hotel and then went in search of finding a nice dark area out of town in hopes of doing some starry night shots.

Without an actual plan, we could find a suitable place so we basically found a dirt road off of the freeway and parked.  The sky began to get cloudy and got progressively worse.  We took a few shots of the sunset and headed back to the hotel for the evening. 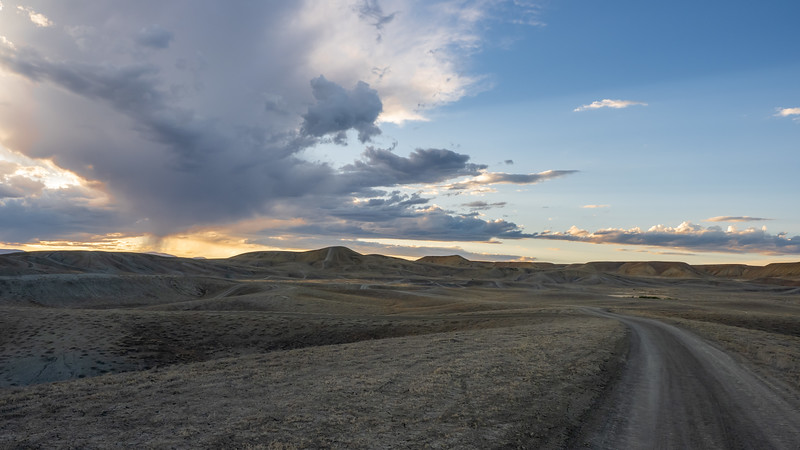 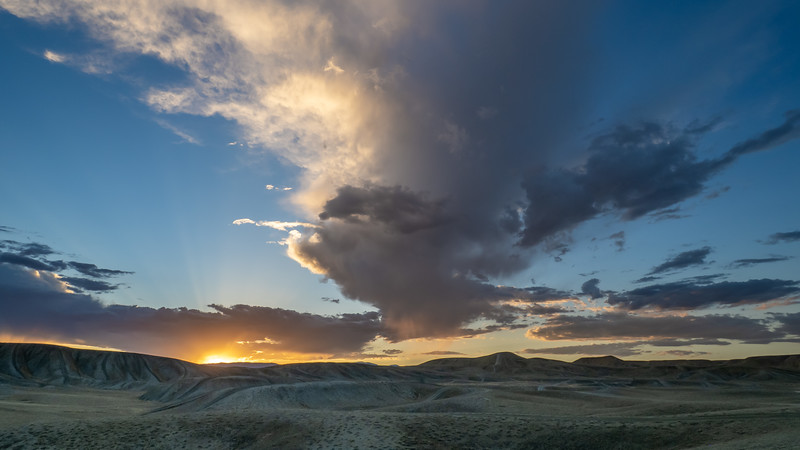 By the time we got back to the hotel and had a quick dinner we both pooped out.  I set the alarm for 0600 so we could get on the road early for our day trip at Dinosaur National Monument. 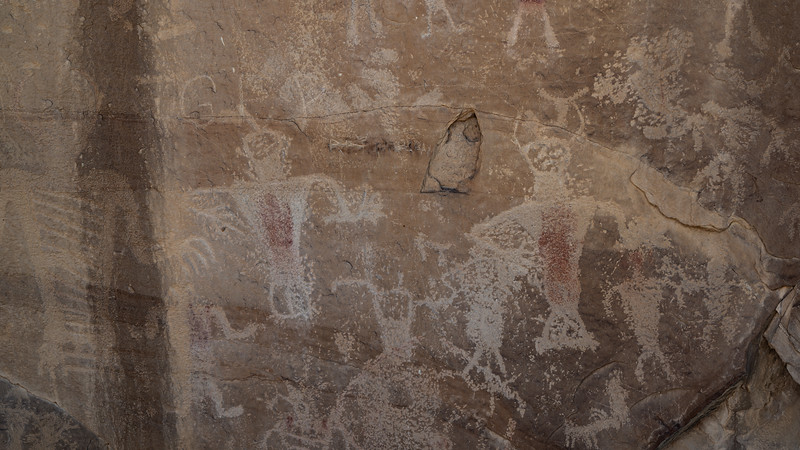 Is that an alien on the left side?  What else could it be?  Iggy Pop?

We met up with a couple of visitors who suggested taking the Sound of Silence trail before heading back to the Colorado side.  Since we had plenty of time in the car already we decided to heed their advice.

The hike was a three mile loop trail. Since the temperature was rising fast we only ended up walking a good mile in before turning around.  We took a few pictures before heading back to the truck.  It was now 90 degrees with no shade in site. 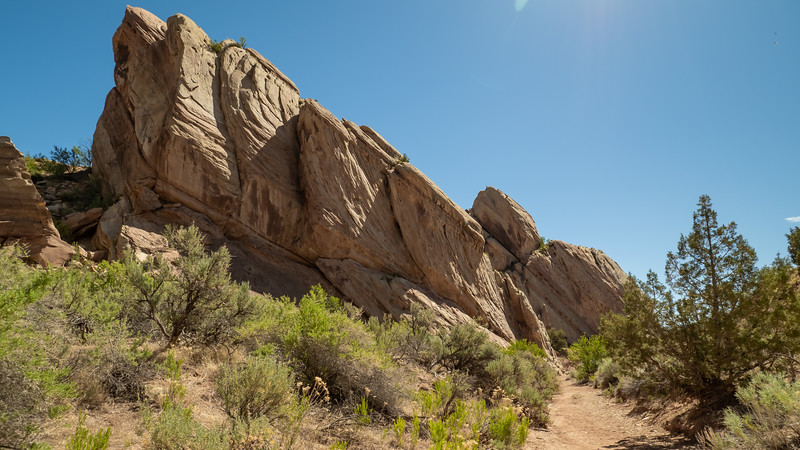 The only shade tree on the trail. Good place for a cool drink of water!

Did I mention that the ranger station was unattended and we didn't have to pay the entry fee?

So far, we only saw two other cars in the park.  Since the camp grounds were closed they must have decided it was cheaper just to leave the gate open than to pay someone to sit there all day.

Off to the other side of the park via Dinosaur, Colorado...

Once again, the ranger station was abandoned.  Not like the fucking Government to squeeze a buck out of someone.

Not a lot of picture taking here.  Just a few shots from the overlooks before taking a twelve mile drive down to the bottom of the canyon.  The drive down was planned since the road is restricted to high clearance vehicles. 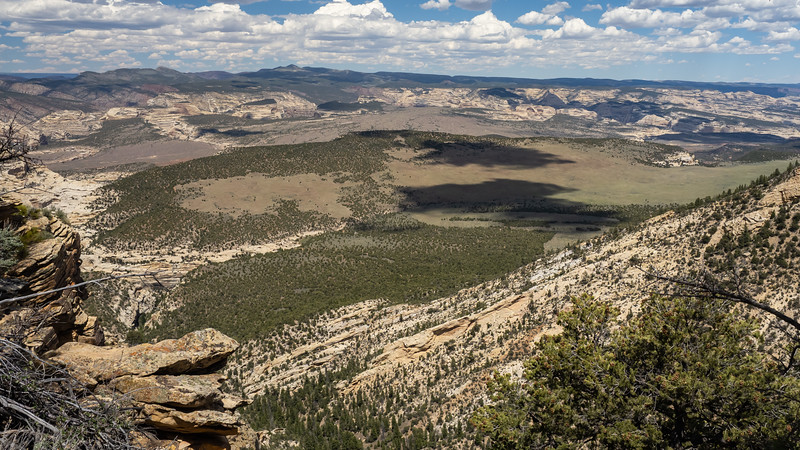 During our drive through the park, we found a great photo spot for some night photography.  Once again, the sky clouded up big time and our plan was foiled.  Clouds are like children.  Who needs them (at night).  Let me be clear.  No clouds at night and no kids period.

Back to the hotel for dinner and relaxation before heading home tomorrow.

June 20, 2020
Once again, we needed to get out of work for a few days.  Not because we hate working but we hate working in the house all day. The vacation days are piling up so we had to burn a few more days. Off to Gunnison, Montrose and The Black Canyon in Colorado. Due to the COVID crap, we needed to find a hotel in that had a kitchen.  No luck finding one unless we wanted to stay in Grand Junction, CO.  A bit too far from our planned activities. Hmm, what about Air BnB?   We never used AirBnB before so we created an account and dove in.  Within a minute or two we found the perfect place.  A cabin in a rural area of Montrose. $95 a night and built just for two. We picked up all of the food that we would need to make breakfast, lunch and dinner everyday and loaded up the Yeti 35 and RTIC65 coolers.  This was a great idea as we only had to buy a couple of things.  The only other expense was gas.  Way to fucking cool. Since we were going to be here for three nights, we thought that we would try some
Post a Comment
Read more

August 29, 2020
We needed another project to keep us busy.  We have been dabbling with some small Lego projects (as shown by my previous posts) and we needed something bigger! After an exhaustive search, we found a Harry Potter set...Hogwarts Castle.  Lego had put out earlier versions of the castle but this is the biggest to date.  Actually, I think it is one of their biggest ever sets.  Over 6,000 pieces. The project took us three weekends (about five hours a day) to assemble.  The set included 37 bags of Lego pieces and four instruction books.  We only screwed up a couple of times.  A lot of pieces look the same but have subtle differences.  You only know you screwed up when the pieces don't fit.   We were not shorted any pieces however, we have bunch of extra pieces (all small, single block size). Here is the completed castle:
Post a Comment
Read more

August 21, 2020
Since we are not going on a safari this year (or Israel for that matter) we decided to take our big lenses out for a safari at the Denver Zoo. We opted to go during the week so we took Friday off and booked our tickets online.  We figured the earlier we got in the better.  Animals are usually active first thing in the morning. The zoo definitely had the social distancing thing down.  Timed entry, one way traffic and plenty of hand  sanitizing stations throughout the park. I commend their efforts.  It could have gone another way and then I would have to have condemned their efforts. Glad it was in our favor. We packed a lunch to eat in the nearby park after our trip to the zoo to help ensure compliance with the social distancing laws.  Saved a few bucks too. Great day at the zoo.   p.s. We forgot our cooler in the back of the truck.  Just got it out today.  NASTY.  I should just through all of the Tupperware away but we have enough plastic floating in the ocean as it is.
Post a Comment
Read more