A Trip to the Bayou

Now we both have at least one shot of the Pfizer Vaccine, we decided it was time to take another road trip.

A quick check on AirBNB and we found a nice two bedroom two bathroom home on Algiers Point.  Algiers Point is a short ferry ride across the mighty Mississippi River from Bourbon Street.

Did I forget to mention that New Orleans, LA is an eighteen hour drive away?

As always, we got up butt ass early to hit the road.  We felt we could make it to Wichita Falls, TX and stay the night at a hotel.

Not a lot of stopping on the way due to the mileage we have to endure.  We did stop in Memphis, TX for a quick photo op and bathroom break:

We still didn't feel safe eating in restaurants so we went to a local grocery store and picked up some heat and serve meals from the deli.

Up and at 'em early the following morning to make it to New Orleans...

We arrived in New Orleans around 6pm and found a small restaurant a block or so from the house.  Michelle got the catfish platter and I got some cow to naw on.

Our first day consisted of a Cajun/Creole Cooking School Class in the morning and a walking tour of local street artists.

We lucked out!  The cooking class was a private lesson.  There were supposed to be six of us but the other people canceled for some reason or another.  Cool.

We made Chicken and Sausage Gumbo, Shrimp and a roux.  All cajun/creole style.

Our chef, Preston was amazing.  Great teacher, cook and wonderful story teller.  If you ever make it to New Orleans, take the Madri Gras School of Cooking.  You will cook some kick ass food and drink.

We had enough time to take the ferry back to the AirBNB to drop off our leftovers before taking the walking tour.  We didn't think this over to well.  The walking tour required that we walk two miles from the ferry building.  I guess we could have taken an Uber but what fun is that?

We learned a lot about the street artists and why sometimes people tag their shit.  I can't remember it all so I won't butcher it here.  Enjoy the pictures and shut up about it.

Now, this one, I know something about.  The "Morton Salt" girl art was put up right after hurricane Katrina.  People have tried to deface it many a times so it is now covered by plexiglass to help preserve it.

We fiddled around the following day in New Orleans and then we got slammed by rain.  Major thunderstorms and torrential rain. 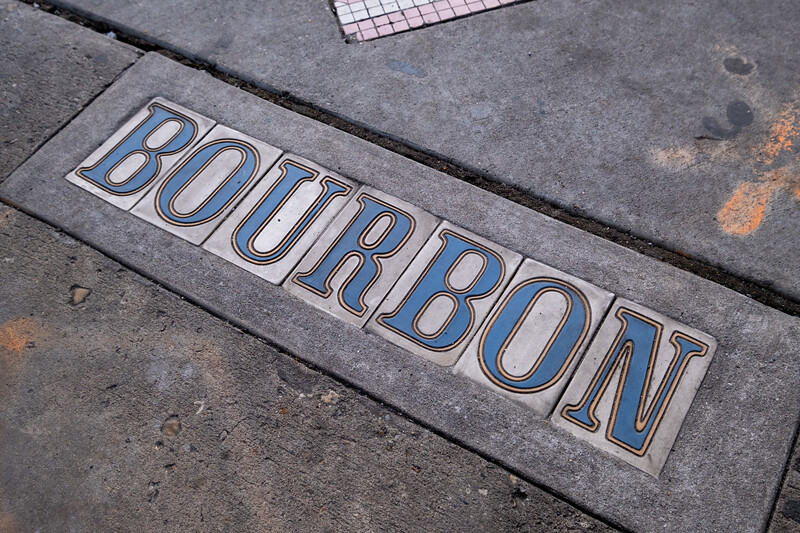 We wanted to visit a few plantations.  We had six planned but only got to see two.  One of the tours was cut shot due to the rain.

Due to the heavy amount of rain, we headed back to the AirBNB to dry off and watch some Netflix.  The storm got so bad, the power went off for several hours.  Glad we had good cell phone coverage so we could stream Netflix.
Wednesday was more rain but we were able to catch a break and hit one of the oldest cemeteries in town, the Metairie Cemetery:

The rain started up again.  This time, totally drenching us.  Lightning storms soon followed and Michelle got really scared.  I was a bit nervous as well.  The storm never let up so we headed back to the house.
The weather report for the following day was grim to say the least.  We hit the road at 6am and headed home.  We drove through one of the worst storms that I can remember.  Visibility was extremely bad and lightning was all around us.
It rained off and on the whole way and when we got home, we endured snow.
Welcome to spring!

August 29, 2020
We needed another project to keep us busy.  We have been dabbling with some small Lego projects (as shown by my previous posts) and we needed something bigger! After an exhaustive search, we found a Harry Potter set...Hogwarts Castle.  Lego had put out earlier versions of the castle but this is the biggest to date.  Actually, I think it is one of their biggest ever sets.  Over 6,000 pieces. The project took us three weekends (about five hours a day) to assemble.  The set included 37 bags of Lego pieces and four instruction books.  We only screwed up a couple of times.  A lot of pieces look the same but have subtle differences.  You only know you screwed up when the pieces don't fit.   We were not shorted any pieces however, we have bunch of extra pieces (all small, single block size). Here is the completed castle:
Post a Comment
Read more

August 21, 2020
Since we are not going on a safari this year (or Israel for that matter) we decided to take our big lenses out for a safari at the Denver Zoo. We opted to go during the week so we took Friday off and booked our tickets online.  We figured the earlier we got in the better.  Animals are usually active first thing in the morning. The zoo definitely had the social distancing thing down.  Timed entry, one way traffic and plenty of hand  sanitizing stations throughout the park. I commend their efforts.  It could have gone another way and then I would have to have condemned their efforts. Glad it was in our favor. We packed a lunch to eat in the nearby park after our trip to the zoo to help ensure compliance with the social distancing laws.  Saved a few bucks too. Great day at the zoo.   p.s. We forgot our cooler in the back of the truck.  Just got it out today.  NASTY.  I should just through all of the Tupperware away but we have enough plastic floating in the ocean as it is.
Post a Comment
Read more

Denver Botanic Gardens In The Spring 2021

May 16, 2021
Denver has officially lifted its Mask Mandate for fully vaccinated people while outdoors!  I still feel a bit weary about this especially since this mandate is based on the honor system. Well, what do we have to loose right?  Head outdoors to the Denver Botanic Gardens for a bit of sunshine while it lasts today. We got to the gardens at 0900 and the really wasn't a lot of people there.  That soon changed.   People everywhere.   Just because the mask mandate has been lifted doesn't mean you can block the sidewalks, or social distance to some extent.   After just three shot hours, we got sick of the people and headed home.   Most of the above photos were taken using my Olympus 12-100mm lens (which totally kicks ass by the way) and my 60mm macro lens without a tripod.  I rule.  You know it so you don't have to verbally acknowledge it.
Post a Comment
Read more