Michelle and I went to a camera launch even (which was a very, very stupid thing to do) a couple of weeks ago at Mike's Camera to see the new camera in action.

At that time we had no interest in buying a new camera since we pretty much off loaded all of our old equipment on eBay.  Selling the old on eBay was probably the seconds most stupid thing to do as it left room in our camera "luggage".  AKA sack... not bag.  Never a bag.  Not any more.

Anyway... the launch was really cool.  The camera reps even had stations setup where you can tryout the new features like Live Neutral Density, Compositing and live in camera focus bracketing.  There were some other features as well but we didn't get to visit all the stations.

A light dinner was provided as well as goody bags which had some discount coupons.

Couldn't resist.  Of course, we couldn't have just one.  We don't share cameras!

Here are the new members of the family: 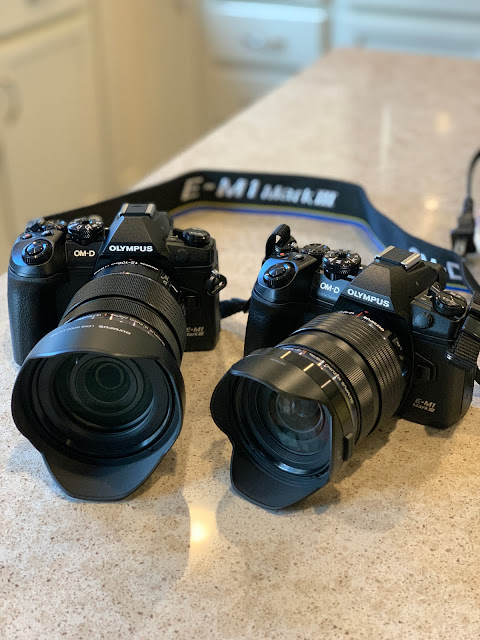 So you are probably wondering how the photo quality is.  No need to wonder!

Get a Grip on Photo Equip!

January 26, 2020
We really, really, really need to get a grip on our photography hobby.  Buy a camera, sell a camera to downsize then end up buying another one for travel or indoor or to "lighten the load".  The excuses go on and on.  We are both bad at this mind you.  Probably the best part is that we pay cash for the most part.  The items we sell are sold on eBay and I am getting pretty good at getting a fair price.  My seller rating is staying at 100% satisfaction.  That being said,  I will probably never buy anything on eBay.  I don't trust a lot of people.  Especially strangers.

Meet the new members of our photo equipment family:

Lumix DMC-LX100
My first and hopefully not one of many Lumix Cameras.  I bought this for low light photography during our trips to museums as well as our international travel for light (photo) flow days when I don't feel like lugging my Nikon Z-6 around.
Speaking of Nikon Z-6:

My first (and once again, hopefully not one of many) full frame cameras.
My a…
Post a Comment
Read more

September 02, 2019
One thing is for certain is that traffic does not exist in Kansas or Oklahoma.  Not even during the Labor Day Weekend.

Michelle and I took Friday off so we could do a short road trip (750 miles one way is considered short for us) through Kansas and to Tulsa, OK.

Michelle plotted a few interesting things to see in both states.

Kansas:  Monument Rock (yes, a rock), Strataca Salt Mine and the Keeper of the Plains in Wichita.

Oklahoma:  A waterfall and the Philbrook Museum of Art.

The sun wasn't out and but we had some cool clouds for the most part.

I will have to say that Monument Rock was really cool.  In the middle of nowhere, surrounded…
Post a Comment
Read more

Downtown Denver Hike (We were bored)

November 20, 2019
The past few weekends have been spent with family or work.  The family part was cool but the work shit is exactly that...Shit.

Since our road trip to spend Thanksgiving in Indiana is a week away, we needed something to fill the gap.

Downtown Denver sounded good.  But what to shoot?  We opted for cathedrals located in downtown.

A little google search gave us nine to choose from.  We loaded up our iPhones with addresses of the churches not actually knowing if any of them would be open.

Traffic was breeze for a Saturday and we parked in our favorite parking lot a block away from Larimer Square.

We ended up getting to four churches with only one actually being open.

We ended up walking about five miles/ 12,000 steps that day.  Our hopes of hitting all the churches and even bigger hopes of more than being open didn't succeed, the day was still a great day as I got to spend it with the love of my life, Michelle.